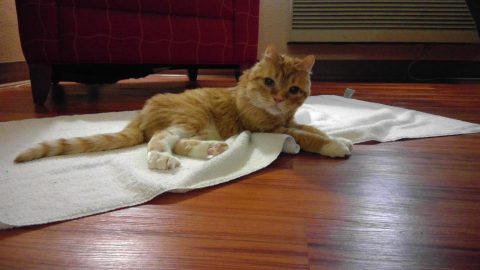 Thomas was born to a feral cat mother who was fed dog food instead of cat food. We don’t know if it was this nutritional imbalance, a genetic anomaly or a virus that changed the make up of his body. At his first vet appointment it was noticed that Thomas walked with a wide stance and seemed a little imbalanced. As Thomas aged his imbalance got worse and by his next vet appointment, he was unable to use his hind legs to walk anymore.

The examination showed that his range of motion in many joints was decreased and that his feet had too much movement of the joints. X-rays found that Thomas had severe hip and elbow dysplasia, was already developing arthritis in many joints along with other skeletal malformations. 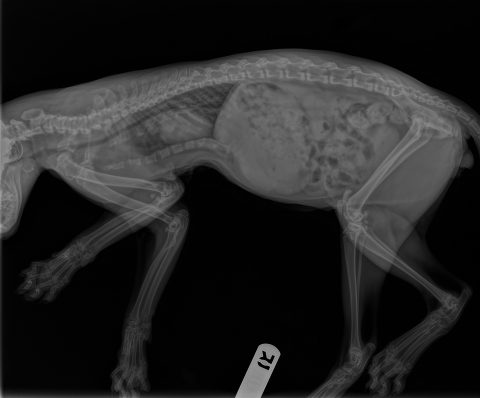 Thomas’ owner loved him so much and she knew she could not afford the surgeries and treatments that he would require so she allowed me to take over his care. We performed a surgery on both hips so that his hind legs wouldn’t fall out of joint due to the hip dysplasia. Thomas still couldn’t walk even though neurologically he was normal.

We found he had a connective tissue abnormality that made his joints too stretchy (had too much motion) so his body was increasing the amount of bone in every joint to try and stabilize it. With intensive physical rehabilitation, acupuncture and nutritional supplements over the course of 6 months Thomas was walking well enough to use the litterbox and lead a full and happy life, including playing with his best friend Terrance. 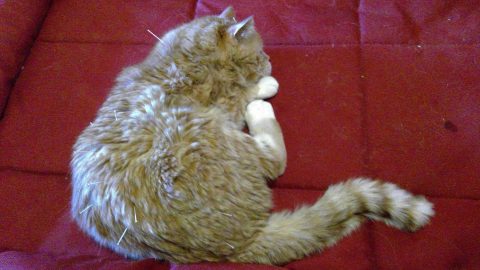 Thomas continued to get physical rehabilitation, acupuncture and supplements and continued to improve. He even came with me to my internship at VOSM (Veterinary Orthopedic Sports Medicine Group) and was examined there and found that he had done very well with his treatments.

Thomas continued to do well until he was about 2 years old when he suddenly had a decline in condition and health. We searched tirelessly for our little lovable man and finally diagnosed him with latent feline leukemia virus. He had such a hard life initially that when he was exposed to leukemia when a baby, he never even developed a response so the test we initially did was negative. We elected to let Thomas go since the hospice treatment of this incurable disease along with his other issues would cause him pain and suffering. We are so very sorry to have lost such a light in our lives but glad that his integrative treatments allowed him 1 and ½ years of a pain free, well-loved and full life. RIP Thomas you will be sorely missed…

Ginny opened my eyes as to the benefits of acupuncture

Chip had persistent lameness in a front leg and he was always so happy to see her because he felt so much better in the days to come after treatment (the special dog cookies helped too).

He had some treatments by other professionals but he was never as comfortable with them as with Ginny. I will always be thankful for her care for Chip.